Siad Berre Quotes; some words of the controversial late ruler of Somalia.

Siad Barre ruled Somalia from 1969 to 1991 when he was overthrown. Sias Barre’s regime holds one of the worst human right records in Africa. He took over power in a bloodless coup in 1991 and left Somalia on the brink of mass starvation and a civil war that left the country without a recognized national leader until September 2012. 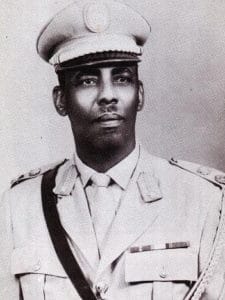 “It is the worst way that big power could act, it is arrogance, it is proudness, it is measuring of one’s decision in accordance to his bigness, unfortunately, therefore lack of any wisdom…”

Siad Barre’s Quote on National Interest, but the question is who defines national interest in a dictatorship?

“In our Revolution we believe that we have broken the chain of a consumer economy based on imports, and we are free to decide our destiny . And in order to realize the interests of the Somali people, their achievement of a better life, the full development of their potentialities and the fulfilment of their aspirations, we solemnly declare Somalia to be a Socialist State.”

“When I came to Mogadishu…[t]here was one road built by the Italians. If you try to force me to stand down, I will leave the city as I found it. I came to power with a gun; only the gun can make me go.”

“As far as socialism is concerned, it is not a heavenly message like Islam but a mere system for regulating the relations between man and his utilization of the means of production in this world. If we decide to regulate our national wealth, it is not against the essence of Islam. God has created man and has given him the faculty of mind to choose between good and bad, between virtue and vice. We have chose social justice instead of exploitation of man by man and this is how we can practically help the individual Muslim and direct him to [a] virtuous life. However, the reactionaries wanted to create a rift between socialism and Islam because socialism is not in their interest.”

Siad Barre’s quote on Uniting Somalia, too bad he took over a peaceful country and left the country in Civil War.

“I did not come to power to divide Somali but to unite them, and I will never deviate from this path. I shall respect a Somali individual as long as he deserves respect, but if he turns away from the correct path, then that is not my business.”

“We should teach the foreigners and colonialists that Somalia cannot be led by other people and that the traitors who fled the country will never lead Somalia.”

Siad Barre’s last word as the leader of Somalia

“When I leave Somalia I will leave buildings but not people.”

Most African kids grew up with a dictator running affairs of their country, General Sani Abacha of Nigeria, Robert Mugabe of Zimbabwe, Paul Biya of Cameroon and for Somalia the only national ruler some of the citizens of the country ever knew before September 2012, is General Maxamed Siyaad Barre.

Would Somalia have been better off with Siyaad Barre in power? You tell me.